Kleen Roofs LLC > Roof Snow Removal
Why do I need to get the snow removed from my roof?

The main reason you should keep your roof as snow-free as possible is that it’s vital for preventing ice dams from forming on your roof.

Ice dams can’t form without snow.  Being pro-active to prevent ice dams, you’re far more likely to prevent your roof from leaking and causing damage to the inside of your home.

Another reason roof snow removal is so important is that it’s a good idea to keep all that excess weight off your roof.  As a rule of thumb, one square-foot of snow that’s one-inch in depth weighs about a pound.  If your roof has 12 inches of snow on it, that could easily amount to thousands of pounds of stress on your roof.  That’s not even counting the weight of any ice dams that may form as a result of leaving the snow on your roof; just one cubic foot of ice weighs 57 pounds, and a typical ice dam can weigh thousands of pounds.  Minimizing the stress placed on your roof is a great way to minimize the risk of leaking and cave-ins (the latter of which occur more frequently than you might think).

Are there any good alternatives to roof snow removal?

From what I have seen, no.

The most commonly hyped “alternative” to roof snow removal is Heat cables. People sometimes use heat cables to try and prevent snow from piling up on their roofs (primarily on the overhangs and in the valleys).  The trouble is that the little amount of hot cables used typically isn’t enough to mitigate the effects of Mother Nature in the wintertime—or to do much more than melt little grooves in the snow after a major snowstorm.  Very few people have long-term success with heat cables; if you’re one of them, consider yourself part of a lucky minority.

Heat cables are also prohibitively expensive to install and run.  Because heat cables are a relatively specialized product, the installation costs alone are significant.

In addition, heat cables run on what’s called a dead-short circuit—meaning that the “positive” and “negative” wires are in constant contact with each other.  As a result, the cables use a ton of electricity, and they frequently fail by shorting out.

Even if you can afford heat cables, you’re taking a gamble that they’ll actually keep your roof snow-free enough to prevent ice dams and leaking.  We’ve removed countless ice dams entangled with hundreds of feet of heat cable—which was either broken, or which was working correctly but simply not preventing ice dams or keeping snow from piling up.

How do I know when roof snow removal is necessary?

A good rule of thumb is to get your roof cleared after every 6 inches of snowfall.  If you prevent too much snow from piling up on your roof, it’s much harder for ice dams to form and you can certainly stop worrying about any sort of leak from ice dams.

Of course, it all depends: I’ve seen ice dams form with only a dusting of snow on the roof.  I’ve also seen roofs with mountains of snow remain free of ice dams.

Generally speaking, even though every roof is different, you’ll especially want to consider this “6-inch” rule of thumb if you’ve repeatedly had problems with ice dams in the past.

On the other hand, if you’ve never had an ice dam and your only concern is avoiding a roof collapse, then you might want to consider holding off on any roof snow removal until you’ve accumulated a foot or more of snow.

When deciding the right time to get roof snow removal, it’s also important to take into account how heavy the snow is.  Wet, heavy snow can weigh 6 or more times as much as lighter dryer snow.  One cubic foot of snow can typically range in weight from as little as 0.26lbs (light, dry snow) to as much as 1.66lbs. (heavy, wet snow).  If you step outside and pick up the snow and it seems heavy and wet, that’s one factor that might indicate you should get your roof cleared sooner rather than later.

How often you need to get your roof cleared also depends partly on the weather forecast.

If 6 inches of snow falls on your roof but the nighttime and daytime low temperatures are forecast to stay above freezing for a couple of days, you probably don’t need to get the snow removed—because it will likely melt soon enough (or at least decrease significantly in weight) and never become an ice dam.

However, if 6 inches of snow falls one night and another 6 inches of snowfall is forecast for later in the week, or if the low temperatures remain below freezing, you may want to remove the snow ASAP.  Or better yet, give us a call for roof snow removal service right away and schedule your roof snow removal in advance – for shortly after the second storm is forecast to arrive.  This way, you’ll get both snowfalls removed from your roof with one phone call, and you’ll be first in line during a particularly busy time for local roof snow removal companies.

How should the snow be removed—with a shovel or a rake?

Sometimes you need your roof snow removed by shoveling, other times by roof-raking.  It depends largely on (a) how big your roof is and how tall your house is, (b) how much snow your roof received, and (c) whether the snow itself is powdery and light versus wet and heavy.

Roof-raking is generally best as an ongoing, winter-long task that we provide to keep snow from being able to form ice dams. We typically rake the roof when 4” to 6” of snow has fallen. The bottom 6’ to 8’ of the roof is kept clear of snow. This can help relieve excess weight on the weakest part of your roof (the overhangs) as well as aid in ice dam prevention.

Shoveling is probably the better option for roof snow removal when there’s heavy lifting to be done, or when you want your roof completely cleared (so as to minimize the chances of a cave-in or the formation of ice dams).

If you need to or simply want to hire us for roof snow removal service to rake your roof, we charge the same rates that we would for shoveling your roof—usually $95-175 / hour.

What should I know in case I need to get my roof shoveled?

The first thing to know about getting your roof shoveled is that it’s most likely NOT a good idea to try to do it yourself.  You can easily injure (or kill) yourself trying to climb onto your slippery roof.

As a snow-removal technique, shoveling picks up where roof-raking leaves off.  Your roof probably needs to be shoveled (a) after a storm drops too much snow to remove with a rake, (b) if the snow is too heavy or hardened for a roof rake, or (c) if your roof is too large or tall to be able to rake it. Shoveling is probably the better option for roof snow removal when there’s heavy lifting to be done, or when you want your roof completely cleared (so as to minimize the chances of a cave-in or the formation of ice dams).

How about a recap?

Let’s sum it all up with a few “do’s and don’ts” of roof snow removal:

Do get the snow removed either by shovel or by rake, so as to minimize your risk of a cave-in and/or ice dams.

Don’t put any salt products on your roof—unless you want to run the risk of discolored shingles and dead plants or grass.

Don’t use heat cables unless you are prepared for significant costs, and the high probability that they just won’t work or will go bad within a year or two after installation.

Do try, as a rule of thumb, to get your roof raked after every 6 inches or so of snowfall, so that it never piles up too much.  If your main goal is to prevent ice dams, you should have your roof cleared after about every 6’’ of snowfall. The best way to do this is to sign up for our snow removal service for the season.  But if your main concern is a roof collapse, then raking your roof after every 12’’ or more of snowfall should be adequate.

Don’t try to shovel your roof snow yourself.  If there’s simply too much snow or if the snow is too hardened or heavy for your roof rake to handle, hire a roof snow removal service instead. 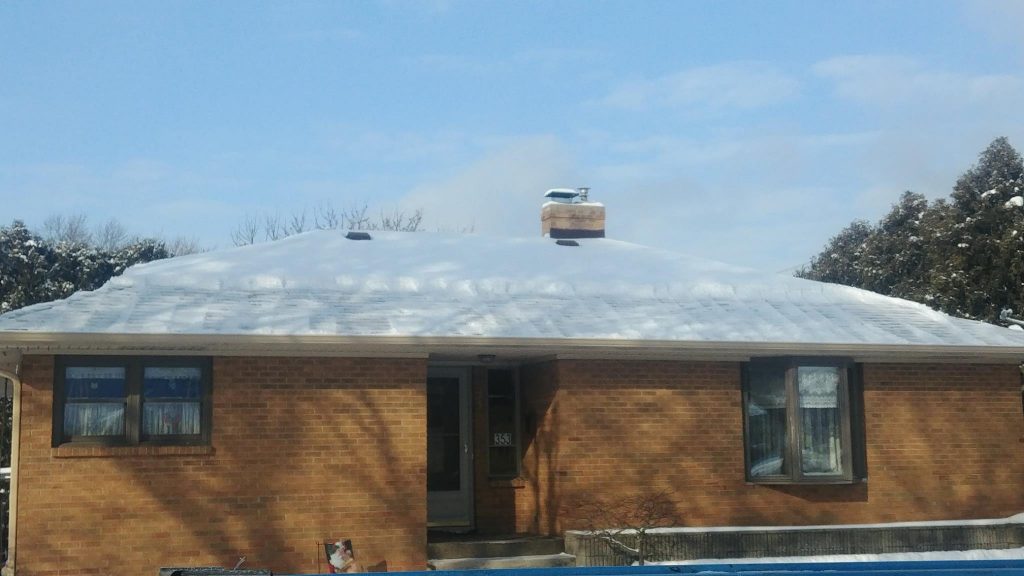 Did a great job. Attention to detail was fabulous, made the house look a lot better.

Squeaky clean windows, siding that looks brand new, and who knew that our decks could look this beautiful! Kleen Roofs was able to schedule us quickly, and did such a thorough job. We seriously should have done this much sooner, and we will make sure to have them do this regularly!

Just had Kleen Roofs out to our home and I must say they are amazing! If you are thinking about cleaning your siding or Roof, you’ve got to call these guys. My house looks fantastic! ⭐️⭐️⭐️⭐️⭐️rating for sure!

Kleen LLC did a good job at a fair price. The 2 workers that were sent were very professional. If you have a need for their services, I would certainly recommend them.

They did a great job, at a great price.

They did a great job cleaning my siding, at a reasonable price. I would definitely hire them again.

Dave is very responsive and his prices are very competitive. I would definitely recommend to future clients. 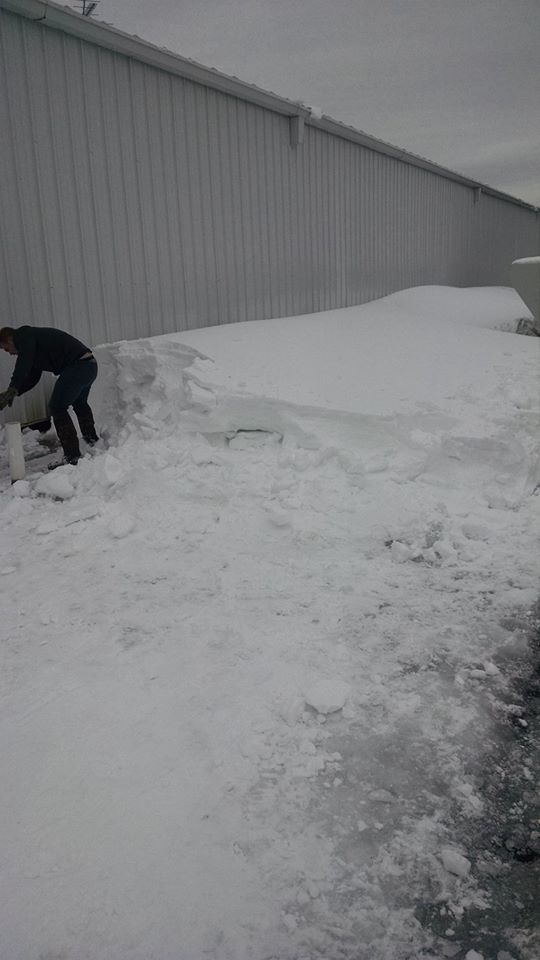